The most full featured Android emulator on Windows 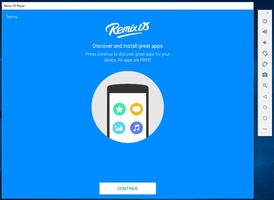 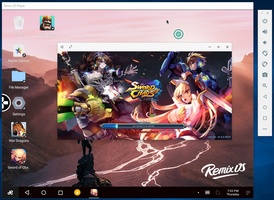 Advertisement
Remix OS Player is the virtualization of the awesome emulator titled by the same name and based on Androidx86 which allowed users to install Android and run it on their desktop PCs. This new version won't completely take over your machine. Instead, it runs from a window from within your Windows operating system itself. That way, running programs on both systems simultaneously is a breeze.

The main appeal to users in Remix OS Player is its interface. In essence, a sleek desktop with re-sizable windows and a taskbar designed for comfort when used from systems controlled by a keyboard and mouse. That's not to say, however, that all of the features in Android were left behind, you'll still be able to use its huge catalog of apps with a high percentage of compatibility and many adaptations to their original control system. Basically, you'll be able to map your keyboard so that clicking in certain ways substitutes the gestures on a tactile screen that's virtualized instead.

Remix OS Player is one of the best alternatives that you'll find when it comes to Android apps designed for Windows operating system. You'll get to use either Android or Windows with a lot of versatility and without having to switch back and forth, just like in VirtualBox.
Reviewed by Álvaro Toledo

Version 1.0. is based on Android 6.0 Marshmallow.
Advertisement

I thought it was a music app because of its name ._. XD

In my opinion, by far the worst installer I have ever known. The latest version does not even download and the previous one throws an error which when searching the internet is one more in a sea of in...

please give me a bluestaks 3 for windwos 7 32 bit